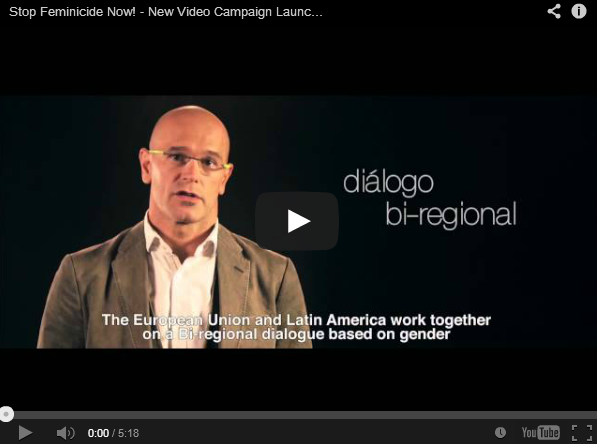 European civil society networks CIFCA and Grupo Sur, together with the Heinrich Böll Foundation, presented the campaign to highlight the desperate and growing phenomenon of feminicide. The campaign’s objectives are to bring an end to feminicide, and the impunity that nourishes this horror.

The first stage of the campaign is the release of a short video featuring MEPs, civil society representatives, and citizens representing Europe and Latin America.

Romeva and Keller highlighted problems with the acquisition of accurate and relevant data. In Mexico, for example, if a women is seriously assaulted or killed, police are likely to attribute the killing to a drug related issue, denying the innocence of the woman and overlooking the greater reality that the woman died because she was a soft target, killed as a form of retribution against her husband or partner. The death is not therefore explicitly drug related, the woman bring innocent of drug crimes, but it is explicitly a crime against a woman, a woman viewed as a kind of property, which can be damaged in retribution for the ‘sins’ of the husband or partner.

Defining the crime is the first step toward an enforceable judicial approach and the reduction of feminicide. Romeva explained that in Latin America the issue is often to do with access to justice, and where economics plays a role, it is principally in denying access to judicial process and protection.

Participants in the video, titled “Highlighting the Phenomenon of Feminicides in Europe and Latin America” include Mikael Gustafsson, a member of the European United Left Party – Nordic Green Left Group; Cécile Gréboval, General Secretary of the European Women’s Lobby; and Gustavo Hernández from the Network of the Latin-American Association of Development Promotion Organizations (ALOP).

The UN in its Commission on the Status of Women (CSW) recognizes the phenomenon of Feminicide and calls upon governments to promote appropriate policies. During the press conference, Dagmar Schumacher, director of the UN Women Liaison Office in Brussels, recalled that, according to a recent report by the UN Special Rapporteur on violence against women, the prevalence of different manifestations of gender-related killings is reaching alarming proportions.

Marc Tarabella (S&D) called upon the European countries to ratify the Istanbul Convention, the first binding instrument on preventing and combating violence against women, signed in Istanbul in 2011.

Five of the twelve countries with the highest rates of Feminicide are in Latin America. In Guatemala 658 women were murdered in 2012. In Colombia, 52 women per day were victims of sexual violence in 2011, an increase since 2010 and which remains in impunity. Within Europe, the rates show that in Italy alone, 137 women were murdered in 2012, more than half of them by their partners.

Although the killing of women mainly are committed in the domestic sphere, the reasons and contexts in which they occur are numerous. “In Mexico for example, the drug trafficking and the fight against organized crime threatens women’s safety,” argued Ska Keller, MEP.

The on-going increase of feminicide in most parts of Latin America and the impossibility to reduce it in Europe demonstrates the failure of States to fulfil their duties to prevent and eradicate this extreme form of violence against women.

Although it is not binding, the campaign launched this week in the European Parliament promotes this resolution. Romeva described it is an opportunity to create a space of coordination and debate between civil society and States in order to raise awareness and influence the political will of public policy decision makers. In particular it aims to have an impact on the representatives of the Euro-Latin American Parliamentary Assembly and through them the national Governments.