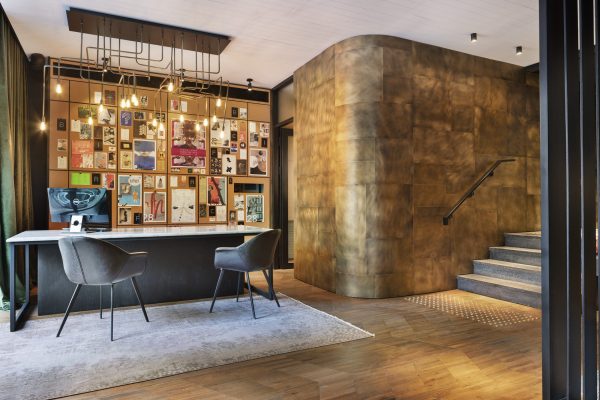 The sticky heat settles on your brow the minute the air hostess commands ‘doors to manual’ and you step out onto the tarmac that is Ben Gurion Airport. A short taxi ride and you are in the centre of Tel Aviv, Israel’s vivacious beating heart. Titled the ‘Mediterranean Capital of Cool’ by the New York Times, the second city that never sleeps has a way of drawing out your hedonistic side.

Colour is abundant, hot golden beaches punctuated by steely skyscrapers. Two oversized deck chairs with ‘I love Tel Aviv’ are ensconced on one of its many beaches, waiting for a casual tourist to climb up and make a statement. They were there in all their glory as part of the city’s costume for the 64th Eurovision Song Contest.

‘Dare to dream’ was the slogan. Everyone did and many still do. These days Tel Aviv-Yao, or simply Tel Aviv, is known for its hip bar scene, cutting edge technology, fabulous culinary experiences, and of course for hosting one of the best Eurovision Song contests in recent memory.

Ordinarily, ‘Eurovision Song Contest’ in the same sentence as a tourist destination may render it a pariah. Even with the promise of Madonna. But not Tel Aviv.

Still riding high, it is focussing on a bright, colourful future and not dwelling on instability. Unfortunately, though, instability still ensues. In March, militants fired two rockets towards Tel Aviv, no damage or injuries were reported but the escalation in hostilities could have damaged tourism. This was the first time Tel Aviv has been targeted by rocket fire since 2014.  More recently, rocket sirens were again heard in Tel Aviv after an Islamic Jihad leader was killed in Gaza. The advice from Ron Huldai, Tel Aviv’s Mayor, was to ‘continue life as usual’. And they have.

Energy and camaraderie abound and the Fabric Hotel harnesses both. Situated on Nahalat Benyamin, this thriving street offers a base that couldn’t be more central with a flirty Bohemian vibe.

The street was founded in 1909. Jewish families built the original Ahuzat Bayit, which has now evolved into the thriving market of Nahalat Binyamin Street. Shopkeepers, craftsmen and bakers all began to build homes and shops in 1914, and over time it has grown into the impressive craft market it is now. The street became a mecca for artists, and still does, over 200 flock to sell their creations every week.

The architecture is a sight for tired, bloodshot eyes. Bauhaus buildings pay homage to the skill of past merchants. The market is adjacent to another famous one, Carmel Market, producer of Tel Aviv’s freshest goods, it’s perfect to combine the two. Sample halva, a tahini based sweet treat, or a boureka, flaky pastry filled with fillings.

Nahalat Binyamin also forms part of White City, a UNESCO Heritage site. It boasts the world’s largest collection of Bauhaus buildings.  Since being designated in 2003, restoration of these buildings, constructed by German migrants in the 1920’s and 1930’s, has escalated. Thankfully it is receiving the attention that it deserves and is being restored to its former glory.

Just twenty minutes’ walk away are the beaches, trendy Neve Tzedek and Rothschild Boulevard teaming with bars and insatiable nightlife. You can eat like royalty on a peasant’s pocket here.

The hotel takes its name from the building in which it is housed, it used to be a sewing factory. Now the façade is red brick and black squared, it still fits in beautifully.

The funky bar and café have an eclectic mural-lined wall, fern trees, mismatched furniture, leather sofas and Eighties memorabilia. Very reminiscent of a New York townhouse. The courtyard is small yet cosy, a retreat from the on street bustle, get lost in the reverie.

The hotel has teamed up with Tel Aviv’s world renowned Imperial Cocktail Bar to create Bushwick, a space to set the day up with breakfast and finish with cocktails. Named after the trendy Brooklyn neighbourhood, they have combined New York’s influences with Tel Aviv’s vibes and flavours effortlessly.

Breakfasts are served here. All vegetable based, a delight of fish, omelettes and kale casserole. In the evening, the bar comes alive, vibrating with hip hop sounds and freshly made cocktails. As a treat, hotel guests also receive a complementary drink during happy hour.

Each of the hotel’s 43 rooms are fresh and airy. Light wooden walls frame the bed, opulent golds and navy throws complement the black furnishings. Carefully selected artwork on walls showcases the exquisite thoughts of the designer. Tranquil and serene, there is even a Fabric yoga mat hanging on the mirror, should you want to partake in the free yoga sessions held on the roof top every week. It all adds to the zen feeling. Also available to purchase.

The bathroom is modelled in chrome and white, with a magnificent rainbow shower.

A complimentary bottle of Israeli wine is there upon your arrival, alongside the Nespresso machine and quirky soda stream maker. A ‘Welcome to Fabric’ handmade sign alongside handpicked flowers is a pleasant surprise.

Helpful touches such as beach bags, with towels are available on request. Bike rental and a shuttle to the airport can be ordered.

This Woodstock like haven in downtown Tel Aviv has strong undertones of New York chutzpah, mellowed by a quest for peace and relaxation. A perfect cocktail, come sample.