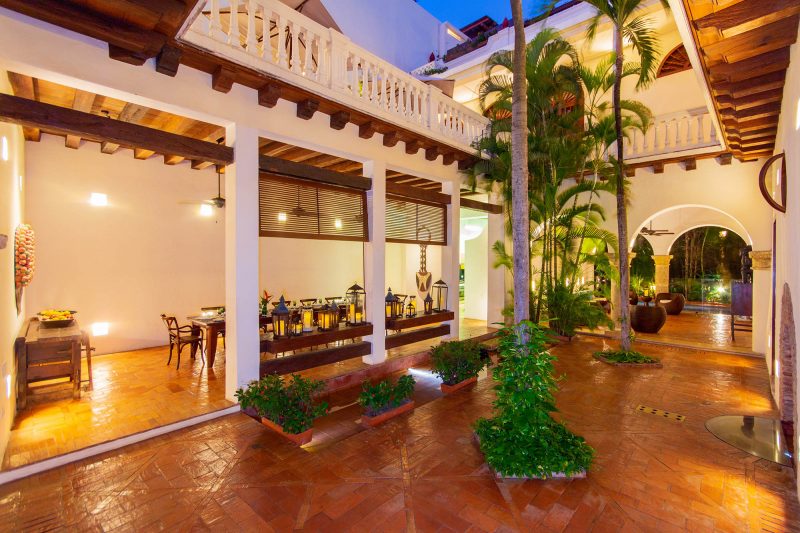 Whistling through the streets, Rafael Nunez Airport disappearing in the rear view mirror, you could be fooled into believing you are on the outskirts of almost any Colombian town. Modern dwellings, skyscrapers in Bocagrande, twenty first century life.

Window down, head cradled by your arm, you breathe in the warm sea air as you traverse along the Bay. You have arrived, the sweet embrace of the Caribbean says so.

Suddenly the journey shifts from the modern to the Colonial, turning right you enter the walled city via one of its many city gates, akin to venturing into Narnia.

The wide streets suddenly become focussed and taught. Cobbled, decadent, and numbered in what logically should be an elevated fashion so as not to confuse. This is not the case. Even the taxi driver had to circle numerous times before he took an educated guess on where the Hotel Quadrifolio actually was. Given that the walled city is relatively small, it is difficult to get lost, though not impossible.

Declared a World Heritage Site in 1984, it is divided into three neighbourhoods, San Pedro, with the cathedral and many Andalusian-style palaces, San Diego, where merchants and the middle class lived and Gethsemani, the ‘cool quarter ‘or it’s ‘Woodstock’, delightfully marked by street art.

The hotel is petite but not unassuming. Even arriving at night, the colours mount an assault on the senses; turquoise, yellows, greens, purples and pinks. It evokes joy.

A striking burnt orange façade with dark wooden balconies swims into view. Vibrant purple flowers tumble down the clay walls, like Rapunzel’s hair.  Arches form the entrance, punctuated by a small heavy door. Step into another realm, this gives you access to the oasis that is the Quadrifolio Hotel.

Before stepping though, first signal your arrival by using the ‘aldabas’ or door knocker. A popular saying in Spain around this time was ‘A tal casa tal aldaba’ or ‘To each house its door knocker’. All of the homes are decked out in pastels, and adorned with flowers and these aldabas. They vary in size and shape, modelled on Colonial architecture.

They serve to communicate the family’s status, the larger the aldaba, the wealthier you probably were. In addition, the shape of the aldaba would give visitors a hint as to what the family wanted to be recognized for.  A fish denoted the owner was a member of the seafaring community, the lion represents the military, militia or government. Unsurprisingly, it is quite popular, given Cartagena’s history. The one you tap at the hotel resembles King Canute. I am guessing an alternative nod to the sea.

The hotel was a Spanish Colonial residence, built in the seventeenth century and painstakingly yet lovingly restored. The term Quadrifolio refers to a clover-shaped oculus used to ventilate the spaces of Colonial Cartagena. Using this as their logo and name, the hotel boasts that each leaf represents their four fundamental principles: elegance, privacy, comfort and service. A time bound ethos.  The fact that the clover is also a symbol of good luck is a healthy by-product.

There are only 8 Junior Suites, making it homely. Enhancing the home from home feel, are two comfort areas, with large sofas, books, candles and nibbles, should you want to put your feet up somewhere other than your room. Breakfast is served to everyone at a communal table in the courtyard, and it feels entirely natural. Its enlightening to break fresh bread, marvel over local fruits and discuss the merits of a coffee bean with guests.

The house was constructed in an L shape with this courtyard at its centre, typical of the era. The white stucco walls and red tiled roof keep it cool.  Spanish Colonial homes don’t have glass windows. Originally they relied on small holes in the walls for light and air that would be covered with wooden shutters in the winter. This is still the case here. The dark wooden beamed ceilings match the wooden internal ornate arched doors, accenting the light stucco exterior doors. The first floor overlooks the courtyard, where palm trees soar into the deep blue Colombian sky.

The terracotta tiles and fern covered walls give that casa feel. The interiors innately have a casual warm feel to them, and special touches such as the wooden toucan bird, wicker seats with comfy cushions, carefully sourced statues, and artwork made from local fruit show the thought behind the design.

The heated pool is a welcome modern addition– surrounded by cascading, lush vegetation.

The rooms are traditional, opened by a heavy large golden key. Unfolding tranquillity. The cool air strokes your face, the sound of jazz plays softly, the wooden fans whir and hum melodically, summing up the hacienda vibe.

Dark wooden shutters keep out the sun. Along the wall is a full length sofa with a smattering of cushions. Cool greens and creams. A plate of fruit waits on the old style cabinet, Colombian ‘Jet’ chocolate is placed upon the custom made bathrooms. IPad and apple docking stations are for your use.

The bathroom is a masterpiece, entered via a tall wooden door, it brings the outside in. The rainbow shower has a glassless circular window, allowing the cool night air to circulate. Handpicked flowers, toiletries and an abanico, or hand fan are welcomed.

There are two conference rooms, including a gourmet Quadrifolio program for diners and the perfect space for intimate cocktail parties. A raft of services are at your fingertips; laundry, massages, hair styling.  Oh, and not to mention use of the private 38-foot yacht.

The hotel has thoughtfully provided a map for you to take on your adventures. Keep an eye out for the Palenqueras as you meander. You will find them dotted around the city, especially at Plaza Santo Domingo. The Palenqueras are the fruit seller women that hail from Palenque de San Basilio, fifty miles north of Cartagena. Their brightly coloured dresses and perfectly balanced fruit on their heads makes them one of the most iconic symbols of the city.

Legend has it that one of the ladies happened to be in the walled city selling her wares when a cruise ship docked overflowing with Americans. When they saw her vibrant ensemble, they produced the green stuff and asked that she stood for a picture. Realising how simple this method of ‘earning’ was, she went back home and told her sisters. And thus, the influx of the Palenqueras began. Bear in mind you should tip them for any photos taken, they won’t let you forget.

You can also purchase the famous coconut sweets from them or from the ‘Portal de los Dulces’ in front of the clock tower. These local artisan delicacies will require a trip to the dentist if you over indulge. There are one and a half pounds of sugar in each tray. Mind you, unique flavours such as pineapple, plum and banana, are well worth the risk.

You will notice the constant sound of music filling the air. Plaza Bolivar with its shady square and rows of benches, is a perfect place to while away a few hours. The most stirring of these sights is provided by local dancers, who regularly perform, usually dancing to traditional Colombian coastal music, played by live bands. Salsa is the Colombian dance of choice, or you can partake in Champeta, a dance that is said to have originated from the sailors who came from West Africa in 1960’s and 70’s to Cartagena.

There are many stories and indeed fairy tales about Cartagena. Its vibrant history ensures none are ever dull. The Cartagena de Indias International Film Festival, the oldest film festival in Latin America, is held here every March. It celebrates the art of storytelling, movie making and acting, the ultimate escape from reality. You may not ever win an ‘India Catalina’, their equivalent of an Oscar, but come and star in your own movie anyway.

Write your own script and ensure it has a sequel, trust me, you will want to come back.

For more information on the hotel: https://www.hotelquadrifolio.com/