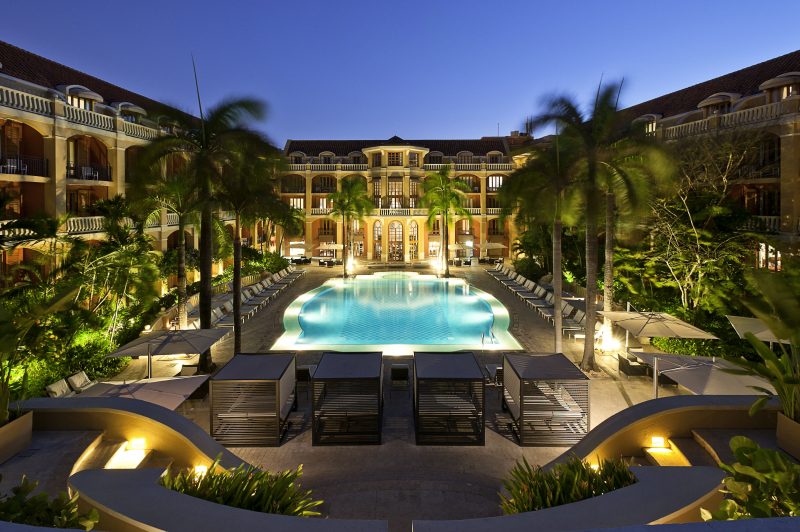 Beethoven’s Third Symphony was thoughtfully entitled ‘la Heroica’ or Heroic in English. Thank goodness he didn’t stick to his original plan and call it ‘Bonaparte’. After all, it was a piece written in 1804 about Napoleon… Beethoven’s memorial to the heroic achievements of a ruler who he hoped would go on to inspire Europe to a humanist, libertarian, egalitarian revolution.

In the same revolutionary vein, Cartagena de Indias is also named ‘la Heroica’. Mention to any Colombian that you are visiting, or have visited, La Heroica and they will deftly declare you an honorary Colombian, a brother by invite if not blood, by pure virtue that you are in the know.

La Heroica was officially founded and settled under the Spanish in 1533, by Don Pedro de Heredia and took its name from the Spanish city of Cartagena. That, or a variation on the name of India Catalina, an indigenous woman from the Colombian Atlantic coast who accompanied Pedro as his interpreter. A myth that I prefer to believe.

Its history is bloody and varied, by 1561, the Spanish crown named Cartagena a major port. This was a perilous decision, as with the new influx of wealth, came an influx of pirates, especially French and English.

One of the first to pillage was the French pirate Robert Baal. After he robbed the city of a considerable amount of gold, the Spanish crown ordered the construction of stone walls as protection, these are the same walls you can walk along today, in the historic quarter adequately called la ciudad amurallada or “the walled city.”

This is where the Santa Clara nestles. Protected and proud.

French influences are no longer criminal, more luxurious. A delightful ‘bonjour’ greets you by the bell boys decked in white. A French enclave in this still Spanish speaking haven.

‘Depuis 1621’ is emblazoned on nearly everything. A very righteous reminder of the year the monastery, that is now the hotel, was established. The St Clare’s or Santa Clara, former convent was lovingly restored and transformed into this opulent hotel in 1995.

Arcades form the cornerstones, a shaded relief from the sweltering heat. Tuscan terracotta reverberates, medieval wrought iron lights suspend above the paved walkways, gold artwork lines the walls, palm trees and manicured tropical vegetation signal that you are in the Caribbean. As does the chirrup of tree frogs and the shrill of crickets rubbing their legs in glee.

The hotel is set in four quadrants, accessed from cobbled streets; the imposing rustic brown fortress door is flagged by antique street lights opposite a vibrant square where vendors sell panama hats- a Humphrey Bogart-esque nod to romanticism.

Romance is significant.  Colombian Nobel Prize winner Gabriel Garcia Marquez, seductively penned ‘Love in a Time of Cholera’, reportedly written with Cartagena in mind. Although it isn’t explicitly named, reference to the city’s “steamy and sleepy streets, rat-infested sewers, old slave quarter, decaying colonial architecture, and multifarious inhabitants” point in its direction. Albeit not the most flattering portrayal, nor the most evident meaning of the book; the enduring power of love.

Love seeps from the pores of this hotel. It wafts in the bergamot infused balmy air (you can purchase a candle to remind you of this). Faire attention, close proximity to the sea causes the air to whip up from the craggy rocks, a ferocious wind that surprisingly, when it engulfs you, warms the skin.

The rooms are cool and crisp with a nautical theme. Luxury is not forgotten, think Royal Yacht Britannia rather than the ‘Dutchman’ in the movie the Pirates of the Caribbean. The pristine white linen has a sundial alongside it’s logo, wooden beam ceilings cut adrift, linen chairs and blue throws are cosy.

The balcony affords spectacular views over the North Atlantic Ocean and a large swimming pool, which is a novelty in Cartagena. They both ensure that it is one of the most visited places in the Americas.

A pyramid of local fruits awaits your arrival. I challenge you to know what even one of them is. Unfortunately for us, trading across the Pacific has not progressed sufficiently to allow export of these magnificent fruits, unlike Sir Francis Drake, they simply wouldn’t withstand the journey.

So devour them at will. The staff have very kindly left instruction on how best to appropriately access the Granadilla fruit, a rather odd orange sized passion fruit. One could be rather crass and simply crack it open with your fingers. Washed fingers, bien sur.

Another delicate surprise are local biscuits and chocolate treats; chocolate is of course what Colombia is legally famous for alongside its coffee.  The communal ash trays are full of coffee beans, shame really.

Why not make the most of those trade winds and dine al fresco? navigate your way through the jungle of palm trees, lit by sparkling lanterns to arrive at your superbly arranged table for the evening. A chorus of insects will serenade you as you sample the local cuisine, seafood is naturally a speciality.

Speaking of chorus, wrap up your stay by seeking shelter in El Coro lounge. A bar deftly named after its original use as the chorus in the old convent. Relax, toe tap and sip on a Mojito, safe in the shadow of the walls that make La Heroica a masterpiece, even by Beethoven’s standards.