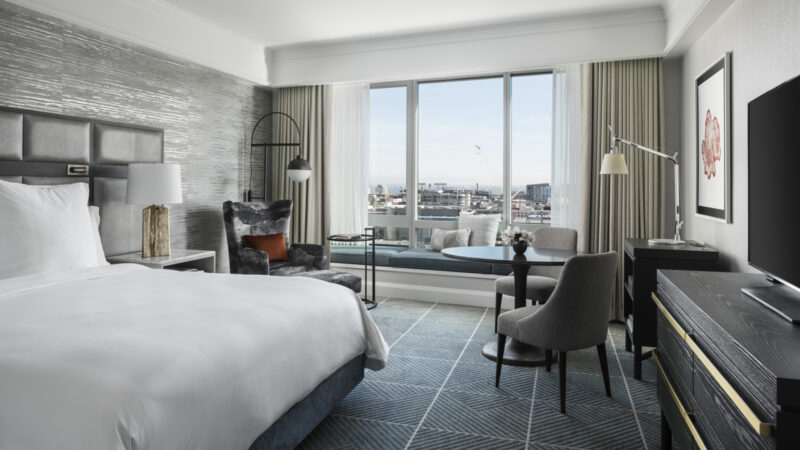 As the Forbes Travel Guide Five-Star hotel prepares to celebrate its 20th anniversary in October, guests can still expect to experience a sophisticated oasis above Market Street for a much-needed getaway.

Set in the vibrant South of Market (SoMa) neighbourhood of San Francisco, the hotel welcomes guests back on 1 August to its sleek, contemporary tower featuring 277 spaciously designed guest rooms and suites and California cuisine at MKT Bar.

As the Hotel reopens, guests will be greeted by the many friendly faces who have been with the hotel since it’s opening in 2001. There will also be some new faces, including that of General Manager, Konrad Gstrein.

“Four Seasons Hotel San Francisco was the first hotel in the city to receive a Forbes Travel Guide Five-Star award, a distinction it still holds today,” says Gstrein. “More than ever, our team is excited to elevate our interactions with guests through simple and meaningful experiences again, while showcasing the best of San Francisco and our urban retreat.”

Adding to the excitement, there will also be a new chef-in-residence program.  Executive Chef Marco Fossati will temporarily oversee cuisine at MKT Bar, in-room dining and at intimate events in the autumn. No stranger to the Bay Area, Chef Fossati was the Executive Chef of Four Seasons Hotel Silicon Valley before his time at Four Seasons properties in Santa Barbara and Vail, Colorado.

On the Hotel’s 5th floor, MKT Bar is the must visit sanctuary for after-work drinks. Upon reopening, it will also offer breakfast, lunch, and dinner. The MKT Restaurant will reopen in winter 2021.

“There are endless ways to explore San Francisco and its environs,” says Gstrein. “As the Bay Area continues to reopen, our guests have the opportunity to create new memories. We invite them to discover the new and revisit favourites, and then return to Four Seasons for a luxurious respite.”