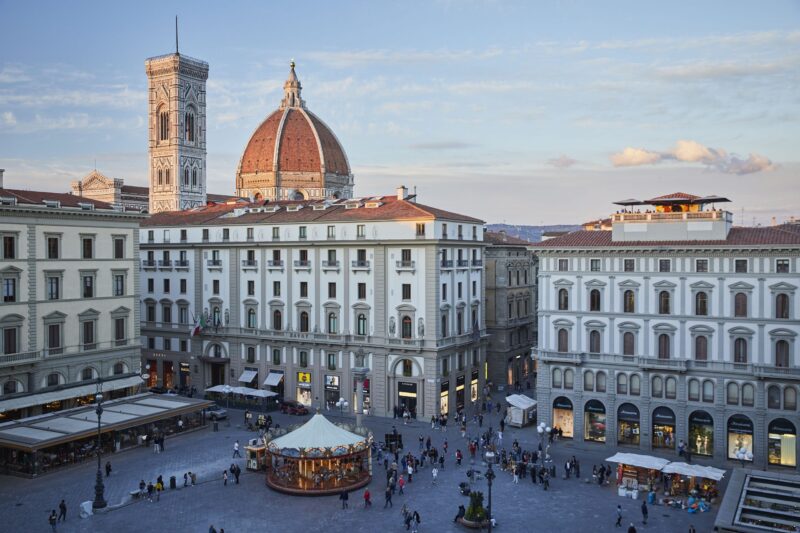 Emilio Pucci once said ‘Gaiety is one of the most important elements I brought to fashion. I brought it through color’.

The feelings of joy his vibrant designs evoke are testament to what an enigmatic creator he was.

First seen on the slopes of Gstaad in 1948, Harpers Bazaar published photos of Emilio modelling his own designs.

Soon he had a cult following.

These were first inspired, he said, by the landscape of Capri and the sea around it.

In the post war era these colours lifted a generation. They had just survived atrocity, they no longer wanted drab and dreary palettes.

It was time to rejoice.

And they did. As has the Savoy Hotel.

Creative Director Olga Polizzi, has embraced the electrifying Pucci colours, marrying them with the Rocco Forte brand in a city that is the lifeforce of fashion and art.

Stepping inside the hotel, a blinding white canvas sets the scene. An elaborate white faux leaf chandelier tantalisingly hangs in the centre.

The first splash of colour comes in the form of glorious yellow tulips arranged on gilded gold sideboards.

Followed by uniquely designed Pucci cushions scattered nonchalantly on nearby chairs. Embossed with the Rocco Forte name, they feature sketches of iconic landmarks; the Duomo, the Ponte Vecchio, and the Picci Family carousel. The carousel is a Florentine institution, decked with twenty horses and two gilded carriages, it bobs and whirls outside the hotel from November to May in the Piazza Della República.

A specially designed Pucci scarf in fuchsia and bright blue also lines the tabletops of the restaurant terrace.

In stark contrast, a black and white photographic exhibition by the renowned artist Franco Zeffirelli, is being shown until the end of April.  Zeffirelli’s ‘Diva’ exhibition celebrates enigmatic women that Zeffirelli worked with between 1958 to 2009. Fanny Ardant, Judi Dench, Monica Bellucci, Elizabeth Taylor, and Maria Callas to name a few.

The exhibition begins in the lobby and continues throughout the hotel, via the Salotto Lounge, an impressive space to relax or hold business meetings, the Irene Bar and Restaurant, culminating in the Duomo Presidential Suite.

Franco had a soft spot for Maria Callas, only those who are lucky enough to stay in the Presidential Suite can admire the two images of her set during La Traviata (1958) and Tosca (1964).

Peering through the window onto the Piazza Della República where Franco was born and raised makes the exhibition venue even more poignant.

I bet he had a ride or two on Picci’s carousel.

Lying at the heart of this romantic city, it overlooks the café lined piazza, is fifteen minutes’ walk from the Ponte Vecchio and close enough to totter in your Gucci heels to the exclusive boutiques on Via Tornabuoni.

Oh, and if you reach out, you can almost touch the Duomo.

The Italian Renaissance produced a seemingly endless source of creative masterpieces.  Frescoes, canvases, and sculptures can be viewed in museums and galleries throughout the city.

Thanks to the concierge you can also find ones that aren’t on the beaten track.

On the right-hand corner of the Palazzo Vecchio in Piazza della Signoria, is a discrete drawing of a face said to have been sketched by Michaelangelo. With his hands behind his back, he reportedly doodled the image to pass the time when he was bored chatting with a friend.

Right next door is arguably the most famous museum in Florence, the Uffizi, housing works by Botticelli, Leonardo da Vinci, and Rubens.

Jeff Koons, an insightful American artist, who creates sculptures of everyday objects, has had many exhibitions in Florence. The most recent entitled Shine. He too uses flamboyant colours to bring his creations to life. His Rabbit sculpture, made of steel, sold at Christie’s in New York for US$91.1 million in 1991.

I wonder how much Michaelangelo’s David would’ve fetched on the open market?

Museums and galleries aren’t the only sources of inspiration and beauty. There are fabulous churches doubling as galleries. Duomo aside, the San Lorenzo, Santa Croce and the Santa Maria Novella are all worth a visit. One even cures ailments.

Word spread and in the 17th century the pharmacy opened its doors to the public.

It still uses the same methods and products that it did all those years ago.

One such product is the Aceto dei Sette Ladri, or Seven Thieves Vinegar. These are smelling salts that got their name from a band of seven men who robbed corpses during the plague. They doused themselves in the vinegar to protect against the virus.

Not sure it would ward off Covid, but it could be worth a try.

Today, bestselling products include the ‘Queen’s Water’ a perfume created for Caterina de Medici, a native Florentine, and Queen of France in the 16th century and the rose water, a cleanser for your every need.

After 409 years the Officina decided to open another store in Florence and The Savoy was its chosen location.

It’s Spa Suite on the fifth floor offers facials and body treatments created in collaboration with the Officina.

The newly designed gym on the ground floor is home to various colourful statues dotted around the machines. One bright green gym honed Adonis sculpture with enviable abdominals is strategically placed in front of the treadmill.

Doesn’t hurt to keep to focused.

As you migrate towards the rooms, the look is more contemporary.

Light grey, floral wallpaper is matched with duck egg blues and soft greens. The rooms are classic, with cleans lines, sleep inducing linen and cosy cushions. The furnishings are all made in Italy, some, like lamps and headboards are specially commissioned. Carrara marble, or Luna marble to the Romans, features in the bathrooms. It has been quarried since Roman times in Carrara in the northern most tip of Tuscany, historically used for sculptures, it adds a vintage touch.

Look out for the frog in the bathroom. Its not Roman nor real, but quirky all the same.

The hotel was renovated in 2017, reducing the number of rooms and expanding the remainder. There are now 80 rooms including the show stopping Duomo Presidential Suite.

The views are astounding, Duomo on one side, Piazza on the other.

Jazz was softly playing as we checked into our suite, drifting through the windows from a nearby rooftop bar, prompting the shoulders to drop and the eyes to close momentarily.

Soak up the atmosphere.

The rooms have fresh flowers, a welcome fruit platter, Irene Forte toiletries; the Hibiscus night cream on your pillow is a miracle worker, an Illy coffee machine and condiments intricately embossed with ‘Irene’. Attention to detail is paramount.

You won’t need an alarm clock. The Duomo chimes from 8:00 am, a pleasant jolt from your slumber.

The fashionable Irene restaurant with a modern piazza facing terrace is an ideal spot for sipping a cocktail and people watching.

Under the command of Fulvio Pierangelini the cuisine is simple, classic, tasty Tuscan food. Spaghetti with tomato and basil, linguine with lobster or mini veal Milanese. Finish with the ultimate Italian Gelato. Push the boat out by adding a slice of tiramisu to partner coffee ice cream.

Breakfast is served here too, dine on egg Florentine washed down with a strong Italian coffee.

We all long for colour in our lives, no more so than right now. And we deserve it.