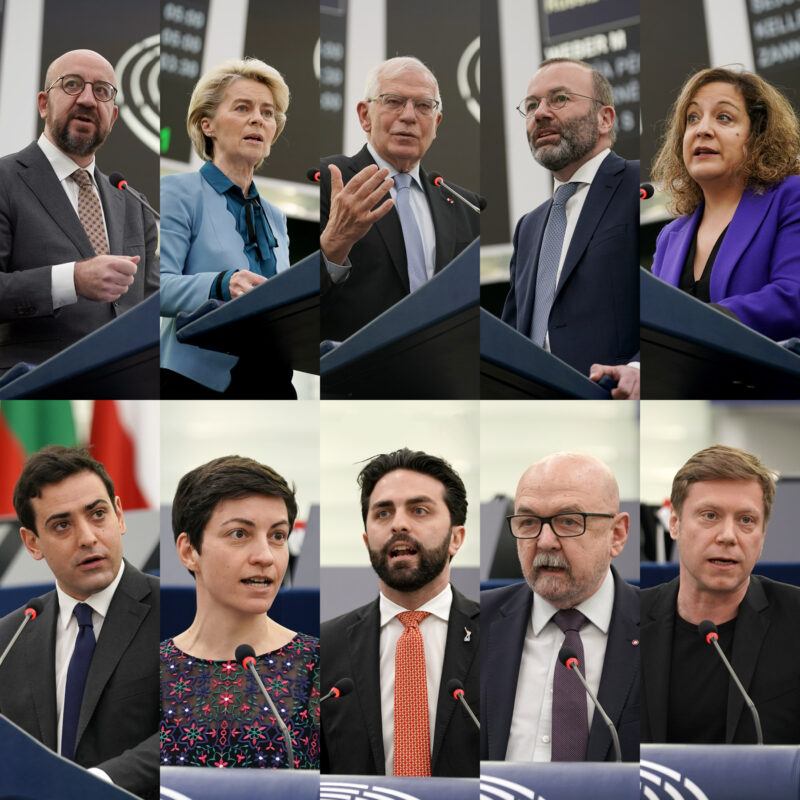 In a debate on EU-Russia relations, European security and Russia’s military threat against Ukraine, MEPs called for a united response and voiced support for Ukraine.

Opening the debate on 16 February, Parliament President Roberta Metsola underlined how the European Parliament has repeatedly expressed solidarity with the people of Ukraine as they continue to face uncertainty and threats of Russian military aggression.

“What we are witnessing here is also a threat to peace in Europe”, she added, whilst highlighting that Parliament later today will also vote to approve EUR 1.2 billion in financial assistance to Ukraine. She thanked the European Commission for its “timely proposal to support Ukraine’s financial stability and resilience under the current difficult circumstances”.

European Council President Charles Michel underlined how the recent and unprecedented Russian military build-up along the Ukrainian border can only be seen as aggressive and threatening behaviour. He pointed out how these belligerent tactics not only threaten the stability and integrity of Ukraine but also peace and security in Europe and the rules-based international system.

Mr Michel underscored that the EU is working continuously with its international partners and allies to de-escalate tensions, first and foremost through diplomacy, but also in preparing robust sanctions against Russia if its military aggression against Ukraine continues. In addition, he announced an initiative, as part of close coordination between the EU and Ukraine, of a donors’ conference to further support the Ukrainian economy.

“The idea of spheres of influence doesn’t belong in the 21st century”, said the President of the European Commission Ursula von der Leyen. Diplomacy has not spoken its last word yet, but now deeds have to follow, she said, referring to the latest signals coming from the Kremlin. NATO has not yet seen a reduction in Russian troops around Ukraine, she stressed.

The Commission President also warned Russia not to weaponise the “energy issue”. As the EU is bolstering other sources of energy, ”we now are on the safe side for this winter”, she pointed out, adding that the main lesson learnt for the EU is that it must diversify its energy sources to not be dependent on Russian gas. The European future lies in renewable energy, she concluded.

“What might happen in Ukraine will mark the future of humankind”, warned EU High Representative Josep Borrell. “If the law of the strongest prevails, that would be a step backwards”, he added. Mr Borrell also emphasised how the EU and its member states are facing the possibility of Russian military aggression in complete unity and considered that “this is one of the positive consequences of this crisis”. He made clear that the EU is ready to negotiate for a diplomatic solution, but also prepared to act, with sanctions, if need be.

Many MEPs highlighted how the current tensions are a wake-up call for the European Union, which must further develop its force of power to handle external pressure and ensure a strong response to outside threats, whilst maintaining peace and democracy as fundamental values and essential purpose. As such, they noted how the current Russian challenges create an opportunity to strengthen European unity.

While expressing their continuous support and admiration for the Ukrainian people, faced with the threat of Russian aggression for years, many Members reiterated the need for both continued diplomacy vis-à-vis Moscow and the need to prepare tough sanctions against Russia. A lot must be on the sanctions table, including the Russia-to-Germany gas pipeline Nord Stream 2, some said.

MEPs also pointed out that the reason for Russia’s aggressiveness is not the expansion of NATO but rather the power of the values and attractiveness of democratic societies, which is scaring Russian President Vladimir Putin and the Kremlin. On another note, some MEPs also criticised the EU for being too ambiguous in its response to Russia, whilst others stressed that Europe needs to follow up its words with action in pushing back against Russian aggression.