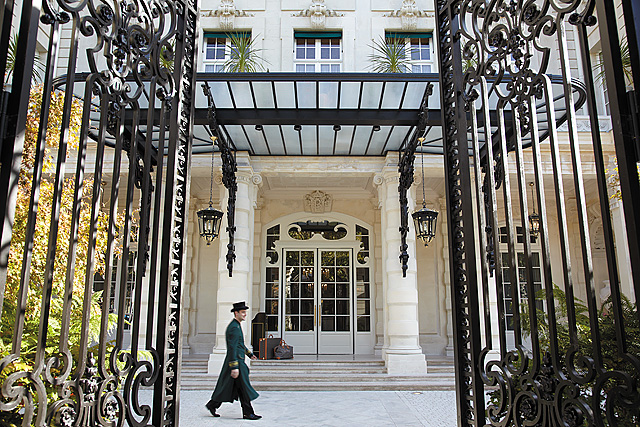 With its black and gold stripes, translucent wings and furry body, there is no mistaking the bee.

Its hum can strike fear into the hearts of many, provoking a disproportionate fight or flight response often resulting in flailing limbs and a racing heart.

I am sure that’s not it’s intention.

Unlike the intentions of Napoleon Bonaparte, the stinging French political and military leader who some may argue purposefully instilled fear to achieve power and become the first Emperor of France.

Not every Bonaparte was as devisive.

Prince Roland Bonaparte, his great nephew, was the revered creator of the majestic palace that is now the veritable Shangri-La Hotel, Paris.

Situated on Avenue D’Iena, in the 16th arrondissement, the hotel occupies a prime location in one of the city’s most elegant yet powerful enclaves, it is swarming with more than ninety diplomatic missions.

This sprawling, affluent southwest corner of ‘La Ville Lumiere’ or ‘City of Lights’, is swaddled in history and luxury. Marcel Proust and Honoré de Balzac lived here, a ringing endorsement of the nurturing calmness and reverence of this often-forgotten quarter. Prince Roland saw the potential, selecting a plot between the statue of George Washington and the Eiffel Tower.

Some claim the neighbouring plaza at Trocadero is the best place to view the Eiffel Tower, I beg to differ, it must be from a Shangri-La suite.

La Dame de Fer – or Iron Lady as she is fondly known, conforms to the Parisienne moniker by performing her own light show. As night falls the sparkling begins for five minutes on the hour every hour, well until 1 am.

The beams of light pierce the night sky, boastful in its brilliance. Such an entrancing bedtime routine is hard to beat. Being figuratively rocked to sleep by the mesmerising lights so close you could reach out and touch them.

Strangely, Prince Roland was said to prefer the other view, facing Avenue D’Iena. Many of the Parisienne elite were, at first, not enamoured by Gustave Eiffel’s creation.  Marie, Roland’s daughter, saw the light and chose the room with the Eiffel Tower vista. Quite where the other resident, his mother Princess Pierre Bonaparte’s affiliations lay remains a mystery. Wrought iron steel was not the deciding factor in his dislike of the now French talisman.  Prince Roland ensured iron was central to the design of the palace. Hence, black wrought iron gates are the first to greet you followed by the classical Louis XIV style façade and the gracious doormen.

The courtyard was and still is a splendid space to arrive. Horses and carriages backed up into the Avenue. These days, Mercedes, or Bentleys wait their turn.

The foyer unfurls, light reflects off the crystal uplighter spilling onto the chequered marble floor below. Pristine off white walls are the perfect canvas for artworks and floral bouquets.

Notice how it engulfs you, the Shangri-La scent.

Now, it is a cosy retreat, where indulgent pastries are served with tea, the Shangri-La signature blend is delightful. It’s also where Shangri-La staff demonstrate the delicate art of popping a bottle of naughtily expensive champagne to be savoured while perched on gold fabric armchairs.

The foyer leads to the decadent white rotunda, where a vaulted ceiling with carved zodiac symbols divulges a little more about its creator.

Prince Roland was a Taurus, an earth sign. Perhaps his destiny was written in the stars?

As an ardent adventurer, he fed his soul on geography, geology, and ethnology. So much so that he cultivated the world’s largest private herbarium, comprised more than 2.5 million samples. He also collected books and lots of them. His library was so large that when it was donated to a university in Lyon it took twenty-two train coaches to transport.

Le Bar Botaniste pays homage to his passion. A darkened den laden with rare botanical spirits, plants under cloches and a Moulin Rouge inspired stage as a backdrop to the bar.

Stay for an encore.

Another set of iron gates leads to the breath-taking Staircase of Honour. The sweeping marble stairs are encased in forged steel and polished brash, typifying the grandeur of the estate. A bronze statue of a child holding a torch lights the way to the upper-level residential salons and princes’ library.

The salons were Prince Roland’s pride and joy, it is easy to see why.

The connecting rooms: Salle à Manger, Grand Salon and the Salon de Famille were made for entertaining, and showmanship was Bonaparte’s forte.

The Grand Salon funnels light across the immense white fireplace, bouncing from the two crystal chandeliers. Gold is boldly everywhere.

The Salle à Manger is dark and masculine. Vestiges of war seep through. Deep mahogany carvings of battle arms and military trophies are guarded by eagles. A depiction of Napoleon returning from his Egyptian campaign takes pride of place.

A breakthrough comes in the form of a floral painting, alive in pink, red and yellow, bursting through a frame from Tuileries Palace.

When the Shangri La Group purchased the building in 2006 architect Richard Martinet and interior designer Pierre-Yves Rochon rejuvenated and renovated her from Prince Roland’s 19th century palace into the triumphant 21st century luxury hotel that she is today.

The one hundred rooms subtly whisper opulence. They are airy, with soft golds, cream, and duck egg blues. Black and gold furniture and chinoiserie features create the perfect mélange of tranquility and luxury. Sixty percent of the suites have views of the Eiffel Tower and the Seine.

Take a long soak in a Guerlain infused bath (the toiletries are Guerlain), enjoy the natural masterpiece through the French windows.

Claude Monet eat your heart out.

Speaking of eating, Shangri- La’s heritage really springs to life in their restaurants. The Shang Palace opened its doors in 2011 under the direction of Chef Samuel and soon received it’s Michelin star for its tantalising Cantonese style food.

La Bauhinia Restaurant, thoughtfully named after a flower found on the flag of Hong Kong, is a two-level architectural marvel. Set beneath a glass cupola, and a Murano three-tiered chandelier, the sumptuous red velvet sofas flanked by large jade vases are the perfect setting for east meets west dishes. Signatures include the lobster salad and the tigre qui pleure or crying tiger, marinaded black angus steak with a spicy sauce.  Finish with the Tarte Tartin Pomme – Coing to share, skillfully carved at your table.

Breakfast is also served in La Bauhinia. Asian classics such as wok fried chicken noodles feature along with French delights, fresh juice, or a cheeky mimosa.

The CHI Spa is inspired by the legendary Shangri la, synonymous with earthly paradise, a retreat from the pressures of modern civilisation. Once Prince Roland’s stables, this Roman inspired oasis with floor to ceiling windows and a heated pool induces serenity. Upstairs is a 24-hour gym and treatment rooms. The holistic CBD massage is marvelous.

Hay and horseshoes may have been replaced by rest and relaxation, but original architectural Bonaparte stamps are never far away.

Seek out the ‘RB’ (Roland Bonaparte) in the stained glass windows and the gold ‘B’ (Bonaparte) entwined in blackened iron on the staircase. An ‘R’ and ‘B’ topped by a crown also features on the bold wooden doors. The eagle eyed will spot an ‘N’ for Napoleon on the crest adorning the mirror in the Grand Salon.

By far the most intriguing stamp is the bee.

Golden images of bees are crafted into the marble surrounds and etched into doorframes.

A swarm climbs the metal doors.

Napoleon chose the bee as his emblem to represent his status as emperor. He saw it as a symbol of hard work and diligence underpinned by the sweetness from their honey. He wasn’t the first French ruler to make that choice. Golden bees (cicadas) were discovered in 1653 in Tournai in the tomb of Childeric, founder in 457 of the Merovingian dynasty. Bees were considered the oldest emblem of the sovereigns of France.

Perhaps for his grandnephew though, the bees had a different meaning. As the perfect pollinators, their importance is more vital than symbolic.

There are no escaping the bees at the Shangri-La Paris and nor do we want to.

Your heart will race for entirely pleasurable reasons.

Sarah Jayne travelled to the Shangri-La Paris from the airport as a guest of the brilliant Blacklane chauffeur service.

Blacklane provides services in more than fifty countries and over 200 cities, from airport transfers, intercity rides, and chauffeur hailing.

The exceptionally simple booking system starts your journey as you mean to go on, seamlessly and in style.